The Story Behind The Books Signed By Chuck C. And Clancy I

The Story Behind The Books Signed By
Chuck C. And Clancy I.*
by Ken R.

And it wasn’t long before I discovered Chuck C. and Clancy I.

I still listen to all of their recorded talks I can — I love them, and continue to relish hearing stories about them.

Through the years, I built a large family company that, as Worth Magazine put it, introduced more people to commodities (the futures market) than anyone in the universe.

So after retiring in 2006, and fully appreciating the principles and potential of supply and demand, I discovered and naturally took to collecting A.A. Big Books and rare A.A. memorabilia.

One of the rarest and most sought after is A.A.’s “Big Red” — the very first printing of the Big Book in April, 1939 — 400 thick pages with a red cloth cover. Some 4,730 were originally printed but many fewer still exist today. It’s unusual to find one for less than $10,000 today.

But in my collecting pursuits, another serious collector shared how he believed that the first printings of Chuck C’s, “A New Pair of Glasses” book are actually rarer than Big Reds. Indeed, they were few and far between. I did some research and learned that the first printing in May, 1984 consisted of only 5,000 copies. Chuck passed away just seven months later, after a long illness, so not only are first printings of Chuck’s book very difficult to find, but those with his signature are much rarer still.

I began aggressively pursuing and bidding on first printings. Other collectors joined in the hunt, and their price went from less than $100 when I began, to a record high of $1,200. I was also fortunate enough to locate and purchase two with Chuck’s signature.

As I was searching for Chuck C’s first-printing books and signatures, a collector in California told me that he had Chuck’s personal Big Red, presented to Chuck on his 20th A.A. anniversary. He explained that Chuck’s Big Book had been hocked years after his death and that he discovered it in a pawn shop in Southern California.

Clancy I. wrote the Preface to Chuck’s C’s, “A New Pair of Glasses,” and after so many years of listening to his recorded talks and hearing countless colorful stories about this A.A. legend, I was thrilled to finally go hear him speak in person — at the annual A.A. Gratitude Roundup in Diamondhead, Mississippi on November 28, 2009.

I showed up early that Saturday afternoon, my prized books in hand, so excited to hear one of my A.A. heroes for the first time live and in-person! I carefully placed the two signed “A New Pair of Glasses” books and Chuck C.’s Big Red beneath my chair.

I was sitting with an A.A. friend of mine — an old-timer with over 30 years in the Program — who isn’t as enthusiastic about Clancy I. as I am (to say the least). I was very nervous about what I was about to do, and before Clancy began speaking, I asked my friend if he thought Clancy would sign these three books for me. “I wouldn’t ask him, but you never know about Clancy!” he said. Indeed, as Chuck himself said in a talk, “A.A. can live with just one Clancy!”

Now I knew from their recorded talks how close Clancy I. and Chuck C. were and how much they loved and respected each other. I wanted to respect and honor their special friendship too. So I said a prayer and asked God for guidance that afternoon.

Clancy was 80, bright-eyed and fit, but he lacked the “bristle” I knew so much about. I heard that if someone arrived late for his talk, he might say “Oh, you had something more important to do?!” And if someone left a talk early, he’s been known to say “Sit down! I’m not finished yet!”

Several people did arrive late this day, and others left early. I held my breath, sat up in my chair, and waited for Clancy’s retort . . . But surprisingly, Clancy said nothing! I was witnessing a kinder, gentler Clancy . . . “This is good!” I thought.

Frankly, I was so nervous that I don’t remember much of what Clancy spoke of that afternoon. But the thought came to me that it would be a nice gesture to offer a donation to Clancy’s pride and joy: the Midnight Mission in Los Angeles, California. So after his talk, I placed a donation in a plain white envelope, printed “MIDNIGHT MISSION” on the front, and sealed it. I showed my friend the envelope and told him the idea that occurred to me during the Meeting. He said, “Oh, no; that wouldn’t be appropriate at an A.A. Meeting!”

With that, and now in more inner turmoil than before, I closed my eyes, prayed, and waited for the long line of people wanting to thank Clancy after his talk to diminish. The line finally shrunk to only three or four people. I took a deep breath and walked up to stand in Clancy’s receiving line. Several more people came to greet him, so I stepped back and let each one get ahead of me. I knew I had to be last in line.

Clancy was shaking hands with the final person . . . It’s time!

I stepped up, smiled, stuck my hand out, and said “Clancy, it’s an honor to meet you, sir.”

He was soft-spoken and very cordial.

I held the books out and said “Clancy, I have three very special books here: Chuck’s Big Red, and two copies of A New Pair of Glasses that he signed . . . ”

I placed them on a table next to us and Clancy slowly looked at each one. Tears were in his eyes as he finally said “I think of dear Chuck every day. I miss him.”

“Would you do the honor of signing them too?” I asked hesitantly.

When he finished, I thanked him, held out the white envelope, and said “I’m not sure if this is appropriate here, Clancy, but . . .”

He looked at it, read the words, said “You damn right it’s appropriate!” and snatched the envelope from my hand . . .

What a day that was!

* These are the photo’s of The, “Big Red” (Big Book) and Three books of, “A New Pair of Glasses” that Clancy I. and Chuck C. wrote in the books. Click on an image to see its original size. 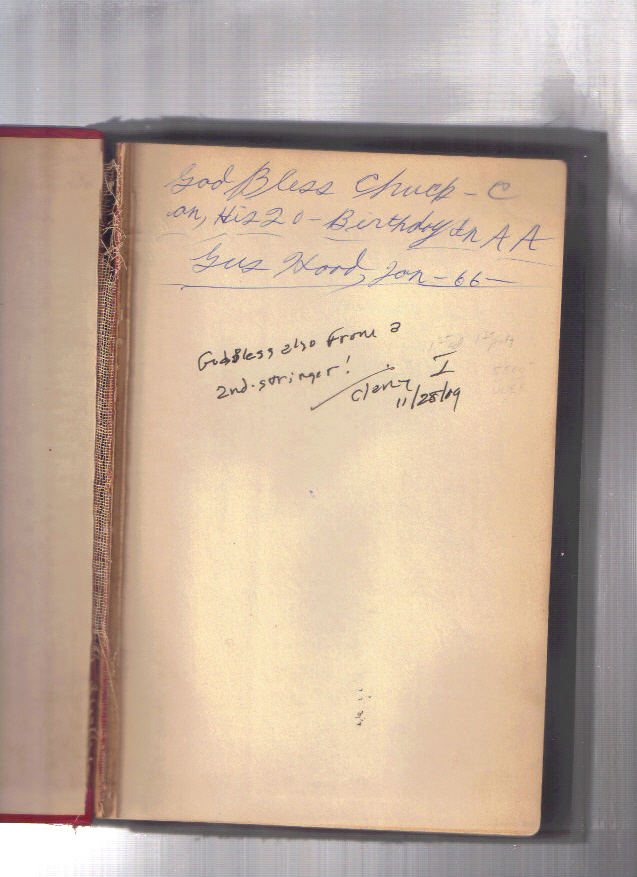